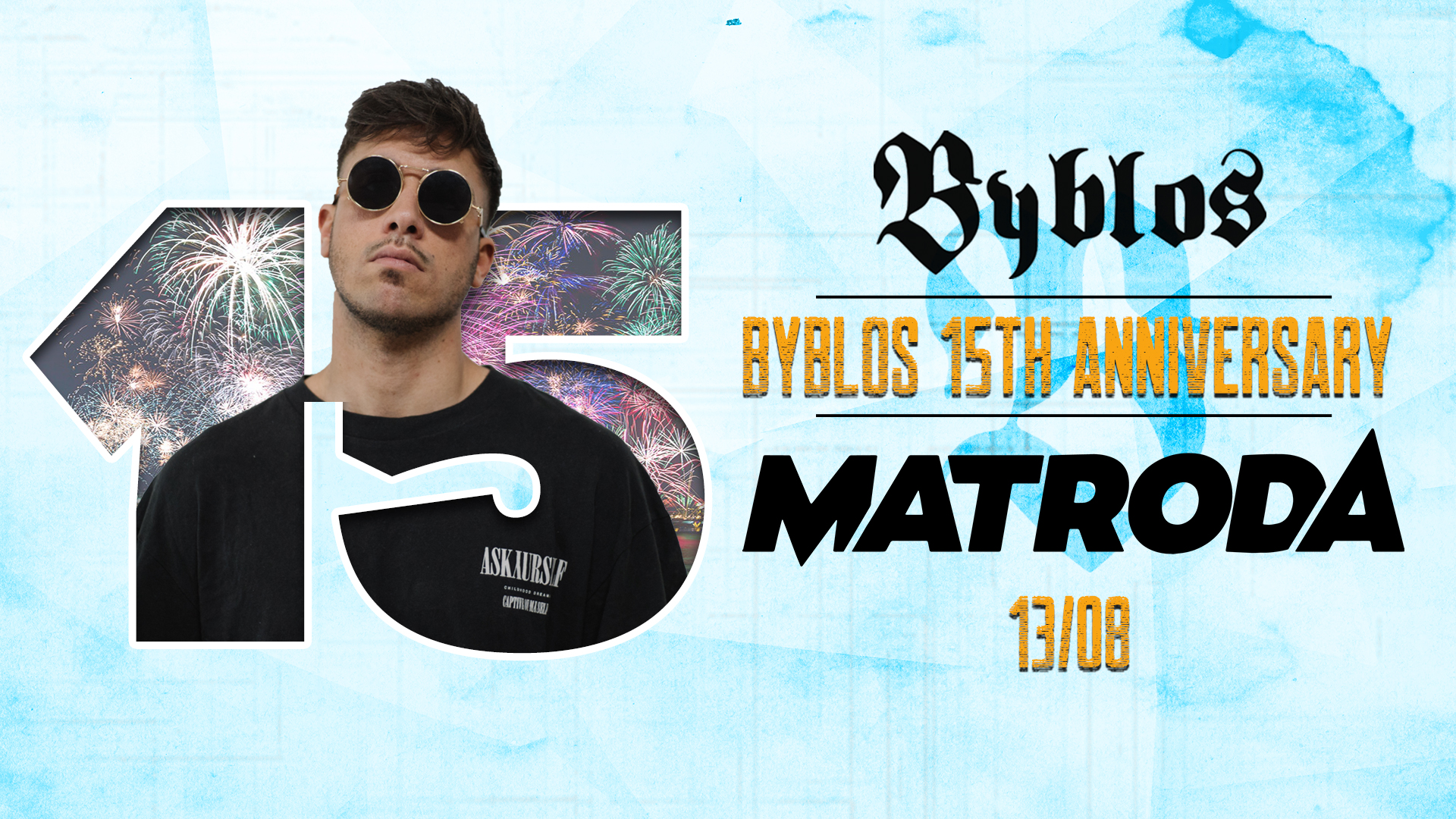 WELCOME TO Byblos – Porec – Croatia
Presents
Byblos – 15th Anniversary w/ MATRODA
MATRODA
Croatian raised producer Matroda is the epitome of electronic music’s fleeting existence. Welcoming house music in his own unique way, with the aptly named ‘matrodasound’ coined by his true fans, the studio sets no limits for this unique but incredibly celebrated artist.Taking early influences from the likes of Led Zeppelin, Frank Sinatra and The Beatleswhile introducing classical training across the violin, drums and keyboard, the Matroda sound has proven its highly desirable accomplishment around the world over recent years.
From shows at EDC Las Vegas and Orlando to Nocturnal Wonderland, Matroda has solidified his presence, both on and off the stage. The natural born DJ and producer has dotted the map with top tier global festivals and sold out shows from Ibiza and Sydney all the way to Los Angeles and more.
His first career remix of SNBRN’s ‘California’ with Chris Lake, proved an electric festival vibe-chaser gaining support from Diplo, Calvin Harris and Major Lazer, leading to further releases on Mad Decent, Confession and UKF. 2019 saw Matroda dropping one of the album’s of the year and his biggest project to date-‘THE RED TAPE’, with features from Kaleena Zanders, Dances With White Girls, taking out runner up for best album following AC Slater’s Hi8 at #1. Later in the year his collaboration with Wax Motif on ‘Lose Control’ garnered much support as well as ‘Walk In The Spot’-a true 2019 house anthem. In 2020 Matroda released ‘Forget It’ via Insomniac Records, hitting over 10 million streams to date. Topping the list ‘Disco Tool’ longside Bleu Clair went right to the #1 spot on the Beatporttech house chart, leaving lasting impressions on the industry and dancefloors alike.
Fast forward to 2021 when he attained the 25th best producerspot on Tracklist1001’s renowned chart, following a string of Beatport #1’s and over one million monthly listeners on Spotify. A new decade opened up and Matroda’s label Terminal Underground was born, releasing the first EP from himself titled Jack The House EP. ‘La Pasion’ reached top 10 chart status on Beatport’s Tech House Chart, in line with the release of the single ‘Lifting’ with 2022 welcoming ‘Gotta Let You Go’, both on Insomniac Records.
The Matrodasound is making a solid mark on electronic music enthusiasts around the world, proving the road is only just beginning for this young producer with a promising future ahead.
FB; https://www.facebook.com/matrodamusic
IG; https://www.instagram.com/matrodamusic/
YT; https://www.youtube.com/c/MATRODAMUSIC
TW; https://twitter.com/matrodamusic
Soundcloud; https://soundcloud.com/matrodamusic
Spotify: https://open.spotify.com/artist/45lcbTsX07JWzmTIjcdyBz…
Warm up Dj
Dj Shurki
Marko Šuran, better known to the public as DJ Shurki, has been actively involved in music sincehe was 16 years old. He finished elementary music school for piano in Pazin, but his path took him to other musical genres and so he began his career as a resident of the discotheque Zodijak Lanterna in Poreč, and later in the disco Kukuriku in Pazin. Since 2015, he has been a resident of the Pazin disco club Magnus. He prefers music from the 80’s and 90’s, but also today’s house and deep house, which opened many doors for disco clubs and other urban spaces. DJ Shurki is recognized for his distinctive musical expression and is happy to be invited to events throughout Istria and on the Adriatic coast. He released his singles “Believe” & “walked away” under the auspices of Kingside.recordings, and the singles can be found on Beatport and other music platforms. You can hear the infectious song “Believe”, which was made in the manner of current
world production trends, on numerous radio stations throughout Croatia.
TICKETS
Presale:
https://byblos.hr/ – 85 kn / 11.3 eur
On the day of the event:
Till midnight – 85 kn / 11.3 eur
After midnight – 110 kn / 14.7 eur
VIP SECTION
It includes
Parking (Level 1 and 2 guarded VIP parking)
Escort hostesses from the entrance to the reserved VIP places
Obligatory consumption of bottles
VIP security guard
VIP waiter
Snacks
– – – – –
BYBLOS DISCOTHEQUE
Zelena Laguna 1 * Poreč
P:+385 (0) 91 292 5678
https://byblos.hr/ https://www.facebook.com/Byblos.Porec.Croatia/
INFORMATION
W: https://byblos.hr/
Table Reservation:+385 (0)91 292 5678
Free Drive: +385 (0)91 292 5678
Age limit 16+